You are here: Home / News / Broadband – the fight starts here 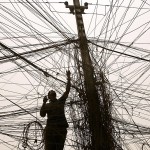 I took swift action after the election to form a new group in Parliament dedicated to fight for superfast broadband to be delivered throughout the constituency. The problem is that it is very good in some places and almost non-existent in others. The blame if hard to focus. BT is, arguably, too much of a lumbering giant to cope with all the variants effectively. But perhaps the commissioning group, Connecting Devon and Somerset, is equally lumbering – given that it represents so many different councils and operates without any real accountabilit. The Governmet is also open to criticism for failing to force them all to do some joined-up thinking. The result still leaves far too many of my constituents suffering what has been described as “digital apartheid”. Last evening was the first opportunity to show the huge strength of feeling in Parliament about this subject – and it is not confined to Devon and Somerset. I participated in the debate, briefly, but wanted to leave time for many others to join in. This way Ministers were able to get a real sense of the strength of feeling throughout the nation to get some action soon.