You are here: Home / News / Yellowhammer – see for yourself

I frequently see the feathered variety of the beautiful yellowhammer bird nestling in the hedgerows of West Somerset, but until Parliament insisted upon it being revealed I had not read the official Operation Yellowhammer planning document. Well now I have. And so should everyone, to ensure that we all know facts rather than fiction about the risks of a No Deal Brexit. Today I publish the document here. It is honestly written and there is considerable use of the words “may”and”might”.  Every Government department was invited to submit a worst case scenario. They were told to think disaster.

In many important aspects No Deal will have few deleterious effects. Power supplies will stay the same, water supplies likewise. There could be some delay getting to and from France – but anyone who travels to France regularly on Eurostar (as I have to do in my role on the Council of Europe) will already know that French immigration facilities are hardly fit for purpose at the 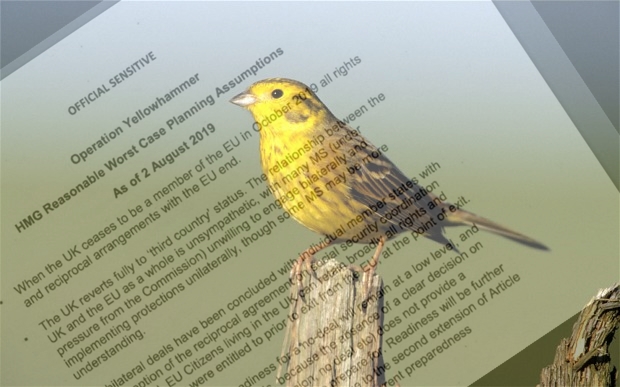 Road hauliers may be worried about hold-ups at Dover, but since this document was written huge sums of money have been spent by the UK government on contingency planning.

I am also certain that the attitude of the people running the port in Calais is to prevent delay at all costs. The national news media and the opposition are saying there will be riots and food shortages. That is faintly, but only very faintly, possible.

It is certainly not likely and absolutely not certain.

The impact of No Deal will be most obvious in Ireland and Northern Ireland. But we knew that all along. That is why the Prime Minister is trying to persuade the EU to accept a new arrangement  to avoid No Deal.

Some commentators are wondering why paragraph 15 has been completely blanked out. I would venture to suggest that this bit was written by the team responsible for national security. It would be irresponsible to publish the details. There are no hidden scandals. This document was compiled during June and July. It was printed  over six weeks ago. Much has changed, day by day. The planning is smooth, the money is there and the expertise is in place.

The government is working to get a deal.  There is absolutely no cause for panic.