You are here: Home / News / WHY I DO NOT SUPPORT BOMBING ISIL 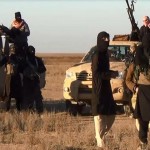 This letter was published in today’s Western Daily Press. I sympathise with the Prime Minister’s aims but have serious doubts about the methods. Parliament was recalled today to hear such opinions. My voice may not be among the majority but I believe in what I wrote. I have served with the British Army, visited the RAF in Afghanistan, understand the problems and fear for the future. This is a conflict with an organisation that deserves no support whatever and commands universal revulsion, but I am sure there are more effective ways of fighting it than air strikes.