You are here: Home / News / TIME TO RE-UNITE SOMERSET 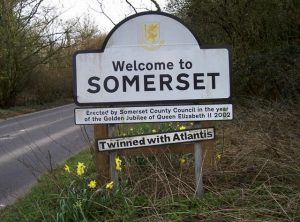 Our great county has become something of a geographical joke ever since local government was reorganised in 1974. Once upon a time the county council represented every inch of this famous shire, but with every amalgamation and creation of new councils the size of the county council has shrunk. For this reason I regard proposals to create a new unitary authority as ridiculous. I am not alone. There are rumours that the government may be less willing to encourage the formation of new unitaries anywhere in England unless existing local councils can agree on a plan.

Well in Somerset there is absolutely no agreement. The county council may want to change its name to One Somerset, but the title is silly and probably a breach of trading standards laws. Under their plan One Somerset should be described as Three Somerset because there are already two other Somerset unitary councils (North Somerset and Bath and North East Somerset)

I believe common sense is dawning at last. And history is on our side. Ours is the county of King Alfred and his ancestors. I raised the issue again today with the Leader of the House of Commons Jacob Rees-Mogg: