You are here: Home / News / Smart Motorway? No thanks

Every week I suffer the disruption of so called “Smart” motorway improvements on my journey to Westminster. The fact is, however, that this scheme – designed to squeeze extra lanes out of already busy roads by scrapping the hard shoulders  – was ill-conceived.Smart motorways depend on the sensibility of all drivers. This is a commodity that cannot always be relied upon.

Today I raised the issue with the Leader of the House of Commons. The Department for Transport has just ordered an inquiry into the 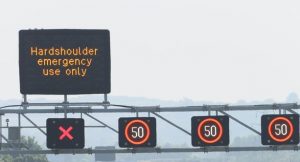 whole Smart motorway programme. The M5 in Somerset is not scheduled for “Smart” upgrading, but there are “improvements” in the pipeline between Bridgwater and Taunton. We need a rethink of these plans immediately. Smart should mean what it says. If, however, the idea is likely to increase the risk of any accident it deserves to be looked at again – urgently.