You are here: Home / News / Save our bees 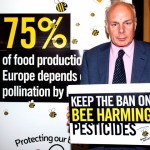 Readers will not be surprised to learn that I am a fan of the Bee. My wife gets me out in the garden whenever she can. We live on the fringe of Exmoor and we are both great lovers of nature. So I was already well aware of the concern that has been widely voiced about the potential threat to bees from some pesticides. This week campaigners held a meeting at Westminster and invited me along. I was happy to hear their side of the story. Bees are an important part of our economy in the South West from the honey they produce to the part they play in pollinating cider apples and the crops in our gardens. I welcome the work the Government has done over the last few years to understand and protect them, most recently through the National Pollinator Strategy. Pesticides are tightly regulated, and decisions about their approval are made at European level. Since December 2013, three of the five currently approved neonicotinoids are not permitted for use on a wide range of crops considered attractive to bees. The Government has implemented these restrictions in full. They are not time-limited, and will remain in place unless the European Commission decides to change them. Now I can sometimes get extremely worked up by the way the EU operates, but currently their bee experts are looking at all the evidence. They will report in the summer. Meantime I am keeping a beady eye on the whole issue. It is, without doubt, controversial and there are arguments on both sides. Take a look at these links for some of the latest coverage: