You are here: Home / News / Pedalling Poppies in Parliament 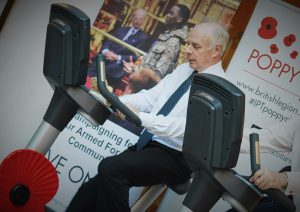 2.33kms in five minutes will never win me a yellow Tour de France jersey or even a minor place on the podium, but this wasn’t really a race. The Royal British Legion came to Parliament with their static exercise bikes to persuade as many MPs as possible to have a go. 120 of us did! Competing against one another and a team from the armed services in order to help raise vital funds for this year’s Poppy Appeal. It is, of course, fast approaching the centenary of the end of the First World War. I can think of few better causes that the enormous support offered by the Legion to soldiers sailors and airmen who have served their country bravely and now need our help.  A few minutes in the saddle was nothing compared to the sacrifices made by so many. It is vital that we keep their memory alive as November 11th approaches. #ThankYou100