You are here: Home / News / MINISTRY OF LIES? 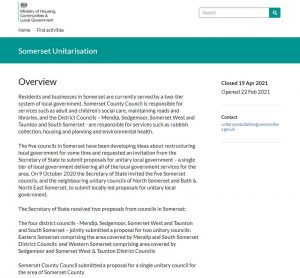 It is exactly THREE MONTHS since the Government’s consultation on two different unitary plans for local government in Somerset closed.

Since then, apart from a late pathetic admission that  only 5500 people had bothered to fill in the form, there has been absolute silence.

Ministers know exactly how many people supported One Somerset and how many preferred the District Councils ideas for a Stronger Somerset, but they simply will not say.

I have asked questions in Parliament, written to Ministers, called in the Leader of the House of Commons to try and get replies but the same silence persists.

WHAT HAVE THEY GOT TO HIDE?

The Ministerial stone walling is deliberate, absurd and transparent. It is a complete and utter disgrace.  Look at at my attempt today to get answers from Mr Luke Hall, Minister for Local Government. I asked him how many people voted for both proposals and this was his shabby answer: