You are here: Home / News / EU flood relief? Red tape but no cash 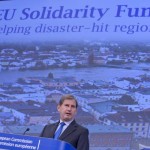 The EU Solidarity Fund was established in 2002 after severe flooding in central Europe. So when flood waters  rose in Bridgwater and on the Levels in 2011 there were quite a few voices calling for us to get our hands of some of this fund. However I knew then that it was never going to be easy. The EU may have the money, but they don’t give it up without a bureaucratic battle.  Yesterday I raised the matter with Local Government Minister James Wharton:

Mr Ian Liddell-Grainger (Bridgwater and West Somerset) (Con): “I gently say to the Minister and the House, that, in 2011, Somerset suffered from disastrous floods. The Prime Minister and my local area looked at this fund very closely indeed. We made the decision that we would not apply for it at that time, because it was too complicated, too difficult and the benefit to the communities was not there.

Those on the Labour Benches can chunter as much as they want, but we have now made the area in Somerset that was flooded safe through UK funding. The proof of the pudding is evident this year—we have not had to switch on the main pumps. The system has worked. We do not need this funding to do what we have to do to secure our communities.

James Wharton: My hon. Friend has demonstrated an understanding of the European Union solidarity fund that is absent among those on the Opposition Front Bench. It is a complex fund which requires a number of facts to be taken into consideration. There is an administration process that will take a long time and cost a significant amount. That is why we had to carry out a proper assessment to understand whether it would be of net benefit to the UK taxpayer to make an application before we got to the place where we could make the announcement that I have been able to confirm today. That is the right process, and my hon. Friend has demonstrated from his own constituency experience his deep understanding of the issue and the complexities of the matters before the House”