You are here: Home / News / GREEN IS GOOD – PHOSPHATES ARE BAD 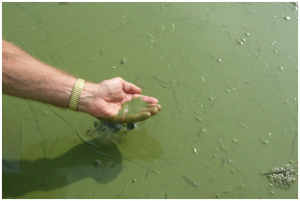 The Somerset Levels used to have the prized status of an area of Special Scientific Interest (SSI). But it has now been officially downgraded because of the high quantity of phosphates getting into the water courses.

The crisis is already causing problems as officials in local councils, environmentalists and Whitehall attempt to tackle it.

New housing developments have already been delayed. New industrial units are stuck in the queue too. It requires concerted action and a great deal of money to have an impact.

Sad to say money is not yet forthcoming from Central Government and the “solutions” suggested by Ministers are far too small to make sense. 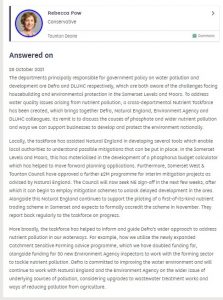 Last Friday (and Fridays are traditionally supposed to be the ideal time to ‘bury bad news’) Ms Pow produced a statement about the handful of measures that have been taken by government.

It was a  long statement, but perilously short  on practical  detail.

Government Departments have, according to her, formed a Taskforce with organisations like Natural England and the Environment Agency. This talking shop meets once every four weeks.

The real signs of action have emerged without any assistance from government. Somerset West and Taunton Council, for instance, intends to borrow £2million to establish new reed beds on mitigation land which could help alleviate some of the phosphate problems at source. But only some.

What is really needed is a proper programme of action with big money to back it.

In Gloucestershire alone , for example, some of my Parliamentary colleagues are arguing that the bill to clean up phosphates will cost £15million. So it really is a problem that needs much deeper pockets than local government can ever afford.

My worry is practical. The delays to new development are serious. Jobs could be at stake. The economy of farming is already delicate, without yet more bureaucratic inspections and checks. The people who should have responsibility for cleaning up our water are the water companies.  If they contributed more money this crisis could be avoided and the problems tackled in the round with proper funding. Taskforce talking shops are too slow too little and  far too late.