You are here: Home / News / Footnote on a Public Service Disaster 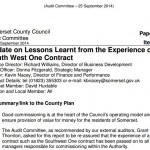 In the midst of preparations for military action against ISIL it would have been easy to ignore a report that came before Somerset County Council’s Audit Committee this past week.  This report listed some important and embarrassing truths about the manner in which South West One was established (back in 2007) and the way it has operated since (journeying between different admin errors,  systems failures and inept constructions). Most people now accept that entering into this outsourcing scheme was a financial disaster prompted by an over ambitious Chief Executive, now long gone. But history does not forget so quickly. The whole affair has sparked a wealth of intelligent expert comment, this is the latest contribution. The admission from the county that they got it wrong  also prompted one former employee to contact his ex Chief Executive, Alan Jones, by email. I was copied in on the exchanges -including Mr Jones’ curt replies South West One emails  It makes for interesting reading!