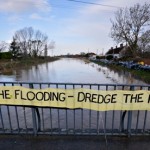 Last night at Westminster Somerset’s MPs spoke with a single voice about what still needs doing to prevent future flooding – but, most important, the response from the Minister, Dan Rogerson, is a clear indication of the Government’s determination to spend money on something like a barrier at Bridgwater as well as continued dredging to prevent last winter’s flood ever happening again. Read the debate in full or study the remarks of the Minister right here:

“Work is in hand to find alternative ways of getting water to flow from the Parrett catchment area by increasing the capacity of the River Sowy and the King’s Sedgemoor drain so that water can be pumped more easily and be diverted to Dunball where extra pumps are working. The footings have been made permanent so we can call on them if necessary. That will lower the levels in the River Parrett sufficiently to enable the pumping stations to be operated, helping to lower water levels on the moors around Langport, and to a lesser extent around West Sedgemoor, Curry moor and North moor.

The Environment Agency is currently scoping this work and hopes to appoint a consultant by the end of this month who will work with communities and professional partners to agree aims and to include them in the development of the options. By the autumn, the agency expects to have assessed a range of options to see what is feasible. Partnership funding will be needed to build the scheme. Further key action is the construction of a barrier or sluice to deal with the impact of a rise in sea level and to protect Bridgwater from flooding, and to look at future development.

On Friday 6 June, the Environment Agency, with Sedgemoor district council, organised a technical meeting to discuss various options for the type of barrier that could be used. The meeting was attended by 60 people who received presentations from experts from across the country who have been involved in the design of other flood defence barriers. The long-term vision for Bridgwater was also discussed. A group will review these options and compile a report by September. That report will contribute to an informed decision on the preferred option.

The Environment Agency estimates that it will be three to five years before construction starts and that it will take two years to complete notwithstanding discussions on funding, to which my hon. Friend is keen to draw attention. If we have a plan by September, that will allow serious consideration of the funding options.

Under the action plan, a new Somerset rivers board is being set up. It will have greater control of and responsibility for work to maintain water and flood risk management in the area. This work is being co-ordinated by Somerset county council, working closely with district councils, the Environment Agency, Natural England and the internal drainage boards, which do such crucial work not just in the Parrett and Tone catchment areas but the Axe and Brue areas.

The Somerset rivers board was discussed at an interim leaders implementation group meeting on 20 June. It was a positive meeting that acknowledged the need for

compromises and urgency. The options under review include organisational structures, legislative requirements and funding models, all issues that will need to be discussed by local and national Government to ensure a sustainable model in the future. Proposals being considered include an appropriate catchment-wide funding mechanism to generate additional funds. These proposals will be discussed at the next leaders group meeting on 7 July. When proposals have been agreed, next steps will include consultation and engagement on them. In addition, work is under way to consider raising the road to Muchelney and building a ring-bank flood protection scheme for Thorney. My hon. Friend was keen to make the case for that.

We have made provision through funding such as the farming recovery fund, and 167 applications were received from Somerset by the 27 June deadline. That represents 44% of all the claims. It was available to other areas of the country that experienced winter flooding from early December 2013 to April 2014. The total value of claims from Somerset is over £1.5 million of the money that was made available. Repair and renew grant is also available, and householders and businesses may claim up to £5,000 to establish flood resilience measures on their property. Of the 283 properties that were flooded in Somerset, 219 were in the area covered by Sedgemoor district council. Other councils have also taken that option.

I greatly appreciate the leadership that has been shown in communities. This has helped to bridge the gap between local and national agencies. We will continue to focus on delivering the action plan. There are challenges ahead, but if we work together we can overcome them so that that resilient community has a better time in future.”