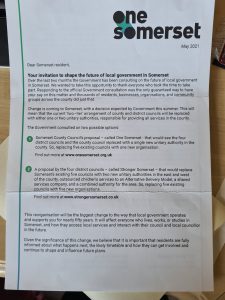 Pity your local postman, groaning under the weight of sacks of unwanted paper sent – at YOUR expense – to every household in the county.

Somerset County Council has been splashing out again on a deliberate campaign of confusion to try and convince voters that there is no point in voting in the forthcoming referendum about local government reform.

This is a stupid argument to make.  Somerset people are not going to be fooled

What we are now witnessing is crude propaganda from a campaign which has already clocked up £1 million pounds worth of spending on “One Somerset” – its plan to turn a failed county council into a lumbering giant of a unitary authority.

I decide today to tackle another well known Somerset resident, the leader of the House of Commons Jacob Rees-Mogg MP, to pour some public scorn on this letter-writing nonsense.