This is the story of a cover-up. A calculated plan to stop the facts emerging. A plot to conceal incompetence on a scale unseen since Somerset County Council signed itself away to IBM with a doomed joint venture called SouthWest One which cost taxpayers almost £70million.

Once again, the story involves a canny multi-national company. Once again, the price tag may run into millions. Top management knew about it. Top politicians knew about it. They ordered an independent audit report from the South West Audit Partnership to try and discover what went wrong, and then tried to hide the damning facts – until someone anonymously sent me a copy.

Skanska is the international firm. Three years ago Somerset County Council signed a contract so dreadfully drafted that it has proved impossible to discover how much money was wasted. All we can be certain of is that Skanska received £30million every year.

But what this secret report now tells us is that parts of the contract were impossible for Somerset to implement.

Skanska insisted that every job they did was checked by Somerset in seven days flat, and then paid for. The payment orders kept on coming if payment was delayed.

They also provided a mickey-mouse system of old-fashioned spreadsheets with over two thousand different highways tasks listed on every page. It was and is an impenetrable routine.

Then Somerset, with its well-earned reputation as the most accident-prone county council in England, compounded the felony by giving the impossible 7-day checking operation to a small unit with no experience of highways, its jargon, let alone its costs.

The whole project was doomed from day one. Imagine Jamie Oliver getting his plumber to cook a meal and asking a dog to check the details.

Three years on and even the expert independent auditors from SWAP haven’t got a handle on how many tasks were overcharged, double charged, undercharged or never properly done. This is typical sample from the SWAP report: 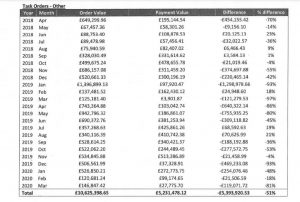 “The spreadsheets don’t make sense, the sums don’t add up, the whole process is a muddle and it might well be that very large overpayments were made and are still being made”

This mind-boggling mess goes on. Skanska is paid to fix the roads. The ridiculous contract they asked Somerset to sign hasn’t been changed.  This week a full council meeting allocated a huge new budget. Much of it will go to Highways.

The Audit Committee of the council was denied a copy of the full SWAP report that you can now read here in full.

Instead, the Highways supremo produced a sanitised version which suggested, wrongly, that everything has been – or is being – rectified.

That is factually incorrect. Wrong. A porky.

The man personally responsible has been more than a little economic with the truth.

Strangely, he remains in his job.

Somerset County Council now wants to be taken seriously as a contender for the status of a new unitary authority with even greater power over our lives.

Can we trust them after this scandal?