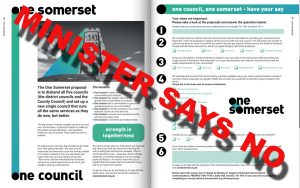 The Government may be running out of patience with Somerset County Council.

Today the council’s Audit Committee was told that Skanska, the firm hired to do all the work on Somerset’s roads,  handed over extra payments of  £4million because county hall management failed to check Skanska’s invoices. This is incompetence beyond belief.

Meanwhile we are still in the dark as to how the county is spending £80millions – government grants to help SCC pay for Covid-19 relief.

This morning  Somerset’s most influential Cabinet Minister spoke out in no uncertain terms about Somerset’s plan to scrap the District Councils and transform itself into a new Unitary Authority.  Their scheme, called One Somerset is still being examined by Ministers.

Another, much more intelligent, proposal Stronger Somerset has been put forward by the District Councils.

Officially the Government has reached no decision. It is highly unusual for a senior Minister to speak so candidly about a plan which is still under consideration. But the tone of Jacob Rees-Mogg, Leader of the House of Commons and one of the Prime Minister’s closest allies, was absolutely clear when he highlighted the major fault in Somerset County Council’s proposals.

Today in the House of Commons I was able to ask him not only about One Somerset, but also about the extraordinary story of Somerset’s vanishing Covid grants.