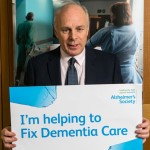 Along with many of my Parliamentary colleagues I want there to be greater transparency in the NHS after an Alzheimer’s Society investigation which found too many people with dementia are falling while in hospital, being discharged at night or being stuck in hospital after medical treatment finished. The Society asked a series of Freedom of Information questions and found:

Alzheimer’s Society came to Westminster to urge MPs to back their new Fix Dementia Care campaign to end the postcode lottery on the quality of hospital care. The first step is greater transparency – once we know where the shortcomings are we can take steps to tackle them.