You are here: Home / News / ANOTHER GIANT COUNTY COUNCIL BLUNDER 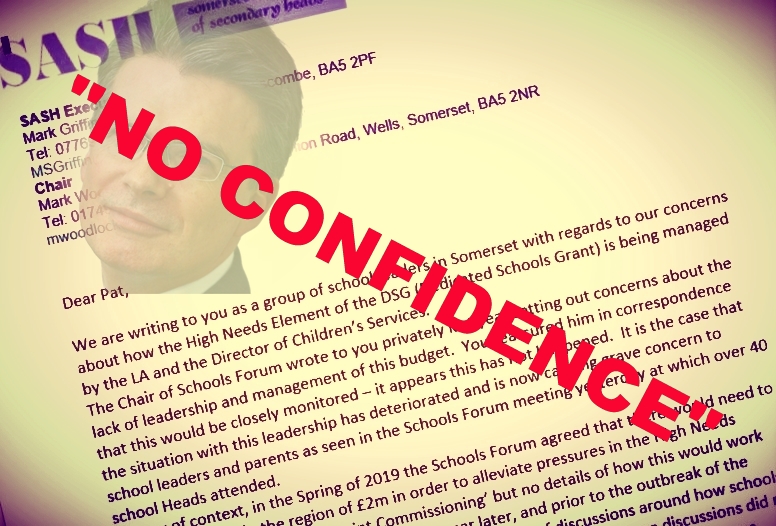 The Heads cite “lack of leadership” and say their relationship with the County Council’s Director of Children’s Services has now reached “rock bottom”.  There is serious talk among this 40-strong group of senior educationalists about holding a vote of “no confidence” in the Director.

These are not hot-headed individuals. They do not normally react with such venom. But their anger appears to have reached boiling point.  A recent letter from the Association to SCC’s Chief Executive Pat Flaherty explains the background. We have just received a copy

It was not passed to us by Headteachers but may have been sent by a disgruntled official inside County Hall.

The reason for their angst is simple. Two years ago County Council was looking for £2million + worth of savings to its Higher Needs Budget. But they failed to produce a working formula that did not  hamper the care provided for needy pupils. A year went by. Nothing happened. Covid-19 arrived and the Director of Children’s Services arranged a series of meetings scheduled for last September/October to sort the matter out. Those meetings were cancelled.

Then, barely a month ago, the County issued “decisions” without any discussion whatsoever. Headteachers took a look and realised that cutting costs in a hurry was likely to mean redundancies in its important Pupil Referral Units – even though the Director of Children’s Services had pledged that redundancies would not be an issue.

The County says it is all the fault of the Headteachers, who should sort it it out for themselves. The Headteachers, not surprisingly, are fast reaching the conclusion that top brass at County Hall are incapable of running education. Or anything else.

Meanwhile  the Director of Children’s Services is in great demand. His salary from Somerset County Council already exceeds £144,500 per year. Additionally he was recently given an extra job by the Department of Education.  He now also chairs the Northamptonshire Children’s Trust – a role for which generous additional remuneration is available.