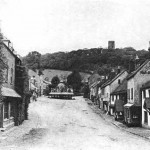 Yes they were often slippery, sometimes downright dangerous, but they became one of Dunster’s memorable historical trademarks. Somehow the town without the cobbles is never going to be quite the same. When the original roadway was given the tarmac treatment at least the pavements kept a line of cobbled memories on either side of the special stones laid back in 2011. But today the County Council men began to lay new slabs that are far less attractive and go from kerb-to-wall.  I was there to take my own picture of the things. The moment I saw them I said: “Stone the crows!” Anyone who suggests these chacterless objects are in keeping with Dunster’s ancient traditions needs to think again. 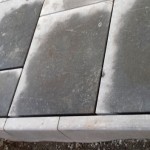